Blu-ray Resolution: Everything You Need to Know is Here!

Blu-ray Resolution: Everything You Need to Know is Here!

What is the resolution of Blu-ray? Is Blu-ray 4K? What is an 8K Blu-ray? You will often hear these questions from people who need to become more familiar with this field. To clarify, Blu-ray, 4K, and 8K are different aspects. Blu-ray is a type of physical media, while 4K and 8K are video resolution types.

Part 1. What is the Resolution of Blu-ray?

Videos are usually stored on Blu-ray discs in the following three resolutions: 4K, 1080p, and 720p. What do they mean, and what are their distinctions?

A Blu-ray recordable disc can contain 720p (1280 x 720 pixels) video. You may have discovered two output options when burning videos to a recordable Blu-ray disc: 720p Blu-ray and 1080p Blu-ray. Regardless of the resolution of the source video you imported, if 720p is chosen, the output Blu-ray video resolution will be 720p.

The Blu-ray Disc, sometimes referred to as Blu-ray, is a digital optical disc storage format. It takes the place of the DVD format and can store many hours of high-definition video (HDTV 720p and 1080p). Blu-ray usually refers to the blue laser used to read the disc to distribute video content, such as feature films and video games. Additionally, it has a higher storage density than the longer-wavelength red laser utilized for DVDs.

In this context, the term 4K refers to the 4K resolution, a display or picture resolution with a width of around 4,000 pixels. Most of the time, 4K resolutions are used in digital television and filmmaking. Yet, the 3840 by 2160p (commonly known as 4K UHD) domain 4K standard exists (Ultra High-Definition Television). The 4096 by 2160p, or DCI (Digital Cinema Initiatives) 4K, is the resolution used by the movie projection firm.

8K refers to the horizontal display resolution, or 8K, of about 8,000 pixels. It is the 4K resolution's replacement. 8K UHD (7680 by 4320) is the most significant resolution determined in the Rec. 2020 (UHDTV) standard. 8K is more advanced compared to 4K. It features a 250 GB storage capacity (maximum).

Part 3. How to Change Blu-ray resolution

A reliable Blu-ray ripping program is a must-have to change the video resolution to max Blu-ray resolution. You can rely upon AnyMP4 Blu-ray Ripping. This multipurpose program is available on both Windows and macOS. With it, changing the resolution like 4K, 5K, and 8K of your Blu-ray can be done easily and quickly.

Moreover, the program can rip Blu-ray into 500+ video digital formats, including MP4, MOV, AVI, WMV, and even a lossless MKV. If you are concerned about the conversion speed, worry no more!

AnyMP4 Blu-ray Ripper has a 30X breakneck conversion speed compared to other ripping programs. Meaning you will no longer have to wait too long for the conversion. Are you interested in knowing how to use it? You can follow the simple steps that we will provide below.

1 Download and install the best Blu-ray ripping program, then launch it on your computer.

Ensure the Blu-ray disc is inserted into the optical drive before launching the program. Go to the Ripper tab, and select the Load Blu-ray menu to add the titles you wish to change the Blu-ray resolution. 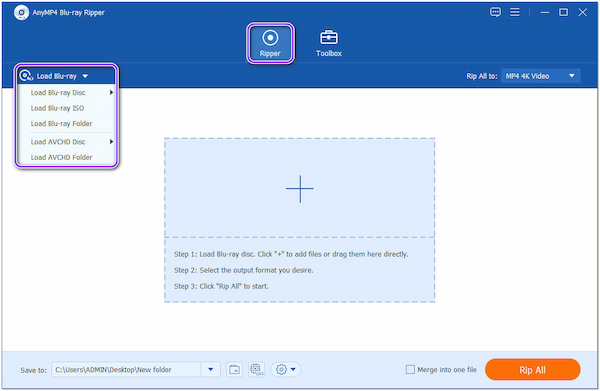 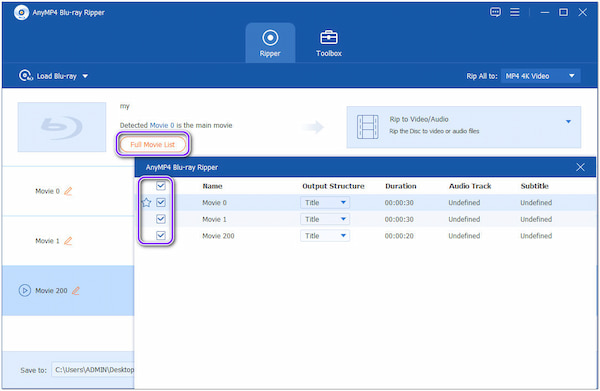 3 Go to the Rip All to button to pick the max Blu-ray resolution. Here you can pick Lossless, HEVC MP4, HEVC MKV, MOV, 5K/8K Video, and more. 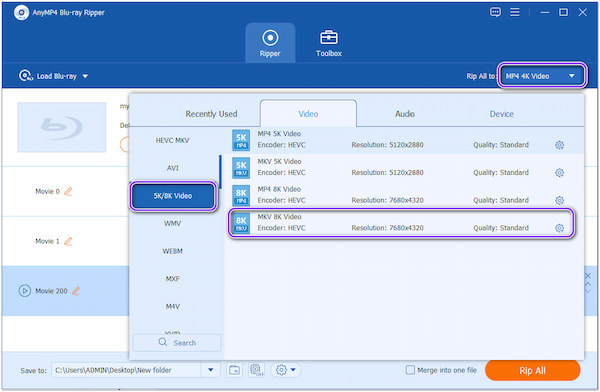 4 After customizing your video and changing the Blu-ray resolution, click Save to and select the destination of your output. Afterward, click the large Rip All button to start the ripping process. 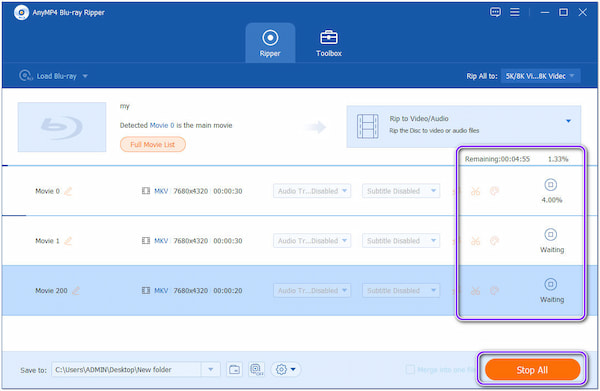 Suppose you want further modifications to your movies, click the Magic Wand, Scissors, and Paint Palette icons to open up the extensive features. You can edit, cut, edit media databases, enhance video, and more. The program lets users modify their movies/videos before the conversion using straightforward editing tools.

Since H.265 provides more excellent compression rates without clearly lowering video quality, it is preferable for streaming videos. But H.264 still holds a place in the industry as the standard since it offers sufficient quality for most daily usage.

2. What is the best video format for Blu-ray?

When you want to rip Blu-ray to digital format, Blu-ray codecs can be H.264 or MPEG-2, which is more usual. You ought to utilize H.264 most of the time with a Blu-ray export template matching your resolution and frame rate.

The audio on Blu-ray is notably better. Many recent, expensive Blu-ray movies come with a Dolby TrueHD or DTS-HD Master Audio soundtrack. These higher-resolution formats support up to 7.1 channels of uncompressed audio.

Now you know the difference between Blu-ray vs. 4K vs. 8K. Each has its own Blu-ray resolution and can deliver a good viewing experience. However, if your Blu-ray resolution is as low as 720p, you can upscale it to max Blu-ray resolution with the best Blu-ray ripping program. Just follow the given steps. Apart from that, it can make the video even better by customizing it. If you liked this post, please rate it with the stars below. As for the related articles or other questions, leave a comment below. See you again!

Add your comments to join the discussion here
You are here: Home > Blu-ray > Blu-ray Resolution