A Walkthrough Guide on How to Burn Blu-ray

A Walkthrough Guide on How to Burn Blu-ray

Burning a Blu-ray movie is more convenient for sharing. Sometimes, we would like to share movies with our family and friends. Yet, we may encounter constant buffering and sluggish transferring speed if we do this over the internet. Why settle in such a situation if you can burn a Blu-ray movie into a blank disc? It will be much easier to share it with our loved ones immediately.

If you’re interested in this idea, you might wonder, How to burn Blu-ray? How does it work? This post will show you the easiest way to do it. All you have to do is read and finish this article and follow the detailed yet simple steps. So without any further discussion. Let’s begin!

How to Burn a Blu-ray Movie

Part 1. How to Burn a Blu-ray Movie

Indeed, technology has grown in a wide variety and is constantly developing—also some of the pre-existing technologies too. For example, a simple Compact Disc or CD has been transformed into a higher quality, known as the prominent Blu-ray Disc. Since then, many of us still want to burn media files, mainly videos, on Blu-ray. Truly, Blu-ray is very beneficial to us up to this day. You can burn it with a heavy external Blu-ray burner to create Blu-ray movies. Besides, you can turn to the Blu-ray burning software to make it.

Learn it by referring to the provided guides below.

AnyMP4 DVD Creator is an all-around Blu-ray burner that can create Blu-ray contents into a Blu-ray disc/folder/ISO, including HD videos and 4K files. This Blu-ray burner provides various menu templates and customizes your menu template. Moreover, the program has built-in editing tools that you may utilize to edit videos before burning.

Since we are talking about how to burn a Blu-ray, AnyMP4 DVD Creator supports several burning engines, such as VSO, CdrTool, and IMAPI SDK. With these burning engines, you can easily create videos into Blu-ray 1-4 layers, BD, RE, DVD dual-layer, and more.

1Download and install the Blu-ray burner, and launch the program on your computer.

Afterward, select the Blu-ray Disc menu and place a blank Blu-ray disc into your optical drive. Click the Add Media Files button to add the Blu-ray movies you wish to burn Blu-ray on the computer. 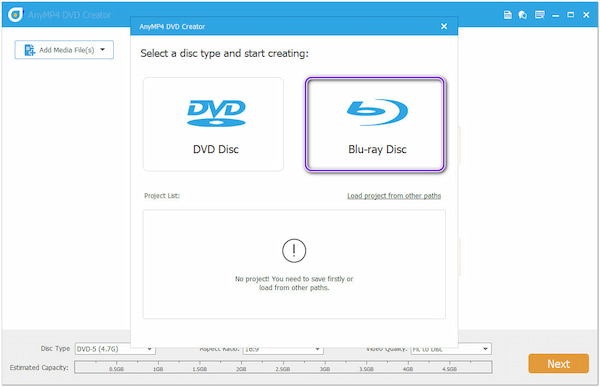 2After uploading the Blu-ray movie, choose your go-for audio track or subtitle for the output Blu-ray disc. Furthermore, you can also specify the disc type and aspect ratio and select video quality from the options at the bottom. Then, click the Next button. 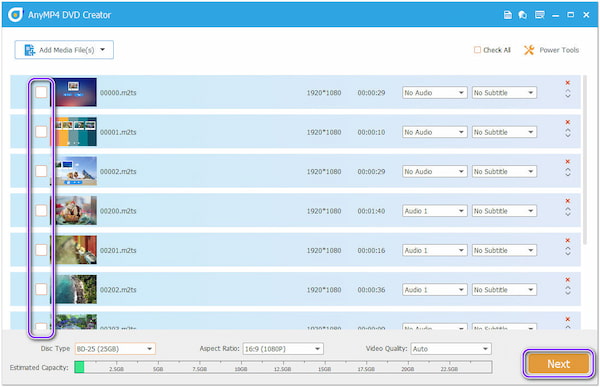 3If you want further modifications to your movies, click the Power Tool button to open up the extensive features of the program. By then, you will be able to modify the video file, subtitle, chapters, thumbnails, etc. 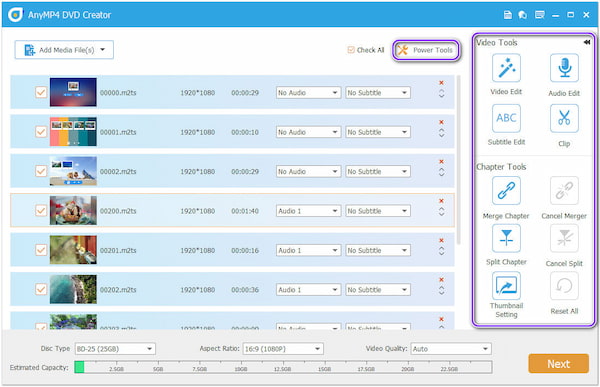 4After the modifications, select the menu template on the Menu Template tab on the right panel. Suppose you want to create a menu with the chosen button and template; select the Custom Template tab. Following that, click the Preview button to view the menu. 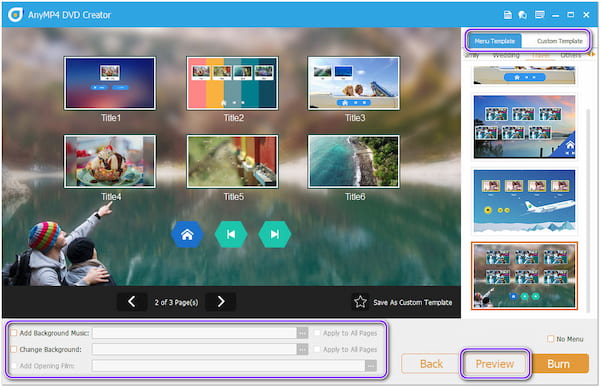 5Tick the box next to the Burn to disc option. After that, set up the burning settings and playback mode. Otherwise, the Blu-ray burner will consider your hardware when optimizing the selections. Finally, click the Start button to burn a Blu-ray on your computer. 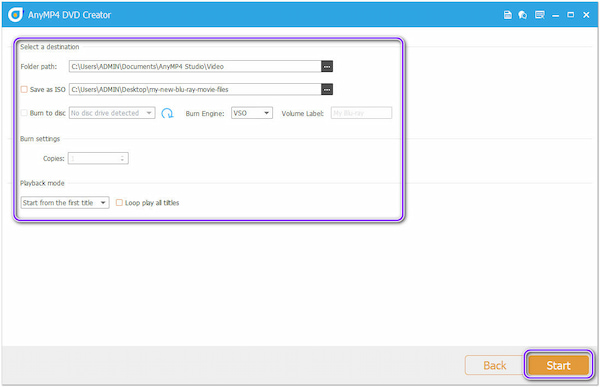 Ensure your computer has a Blu-ray drive; an internal or external one is ideal. It is necessary to burn the video to a Blu-ray disc. 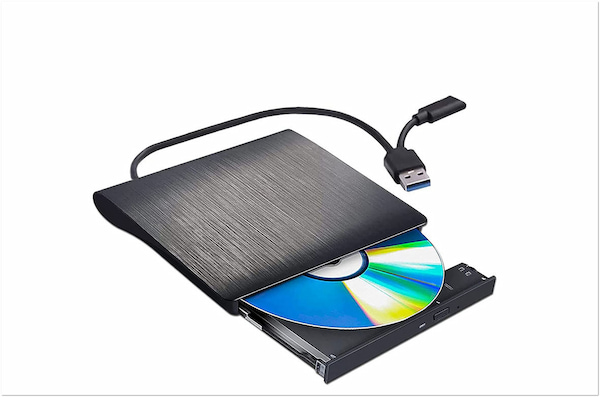 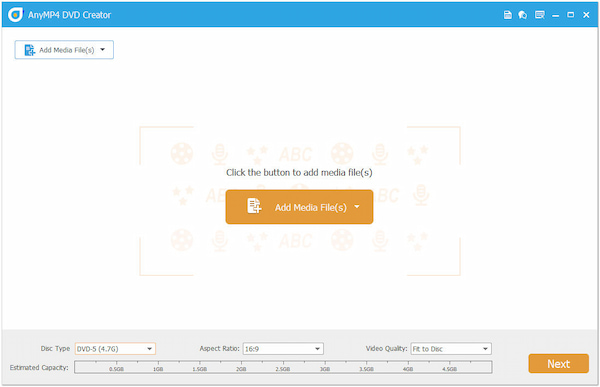 Before burning the video on a Blu-ray disc, you should pick the right disc type. Blu-ray discs come in various formats; for instance, the BD-R is a write-once Blu-ray disc, but the BD-RE is a rewritable Blu-ray disc. Make a distinction between them. 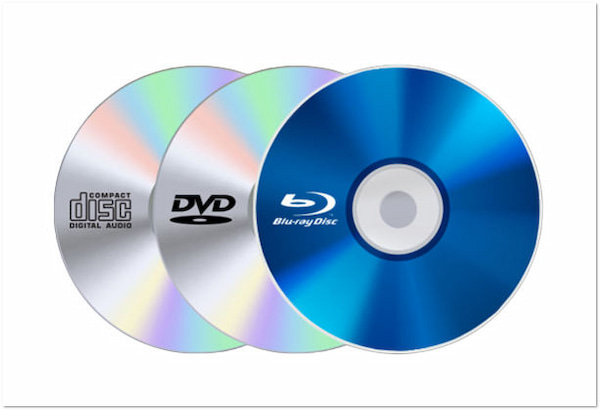 The setup of the data file, mainly if you are burning a data disc, should be one of the essential suggestions for the issue of what you need to burn Blu-ray discs. You should put these video files in a folder to make loading the selected videos more uncomplicated. 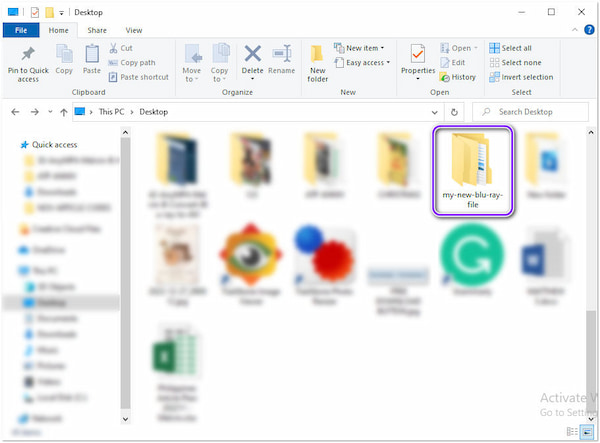 Part 3. FAQs about How to Burn Blu-ray Movies

How long will it last to burn a one-hour movie on Blu-ray?

Burning a Blu-ray is a multi-step procedure that takes several attempts. The length of the file you have impacted how long it is. In other words, the burning procedure must last between 50 and an hour for a movie that is an hour long.

What is the distinction between a DVD from a Blu-ray?

Blu-ray optical discs perform better than DVDs in terms of holding high-quality data. To retrieve data, DVD uses a red laser with a 650 nm wavelength, while Blu-ray uses a blue-violet laser with a wavelength of 405 nm. That makes Blu-ray at the top as a result. Get the differences between DVD and Blu-ray.

What Blu-ray Disc type is the most highly recommended?

On the internet, we found different searches frequently using the word Blu-ray disc top of most prominent. Ultra HD Blu-ray discs answer this question since they offer high-definition video and audio services.

Can Blu-ray discs be worn out?

Definitely YES! They do, and so does almost everything. They contain a covering that makes them more resilient to scratches and durable than DVDs. Optical media stamped in a factory is typically intended to endure 200 years or more.

Which is better than Blu-ray?

You probably heard a lot about Blu-ray digital optical discs. But 4K Blu-rays are far outstanding to them. 4K Blu-rays use High-Efficiency Video Coding, or HEVC, an extreme video codec that offers superior compression compared to its predecessor. They are, in essence, the next generation of high-definition Blu-ray discs.

AnyMP4 DVD Creator can help figure out how to burn a Blu-ray. We've all had experiences when we've needed to copy a Blu-ray to a Blu-ray disc, DVD, another storage medium, etc. Following that, you can use this Blu-ray burner program as necessary.

A guide on how to burn Blu-ray movies is also provided. The built-in feature is an obvious choice for burning Blu-ray content. With the best Blu-ray burner software, you can create a Blu-ray movie to watch it from a big screen. For any other related topics, you can leave us a comment below.

Add your comments to join the discussion here
You are here: Home > Blu-ray > How to Burn a Blu-ray Movie