Can You Convert Blu-ray to Digital? The Answers Are Here!

Can You Convert Blu-ray to Digital? The Answers Are Here!

When we purchase a Blu-ray, it is crucial to know the format they used; for a better watching experience. In this post, you will learn which has better video and audio quality. Is it the MKV or 4K? Is the Blu-ray disc worth the price? How to convert Blu-ray to digital? In this article, you will find the exact details and learn the distinctions of the best Blu-ray format.

Part 1. What is the Best Blu-ray Format

The MKV file supports lossless quality. It can contain unlimited videos, images, or audio in a single file. Besides, it supports a vast range of available codecs since it is open-source. This video format can store audio and subtitle tracks in a single file. MKV is famous for storing movies; it is a small file size with the best-quality footage.

Many say that the best format for preserving moving pictures is MKV. It starts with essential components of other well-known file formats, like compatibility, the capacity to store audio and video, and its metadata. In terms of essential usability, this puts MKV on par with other file formats.

Furthermore, besides the unlimited number of still images, subtitle tracks, and metadata files, MKV is the most flexible and universal format, as it can keep any kind and quantity of video or audio codecs.

With excellent compression, the new video codec used by 4K Blu-rays is called HEVC. Compared to standard Blu-ray discs, 4K Ultra HD Blu-ray discs can deliver video at a maximum bitrate of 128 Mbps instead of 40 Mbps on a 4K Blu-ray player. It matters while viewing High Dynamic Range 4K Ultra HD content. As a result, particularly on larger screens, the graphics are more precise, the colors are more affluent, and the overall watching experience is more realistic.

Dynamic Range 4K Ultra HD content. As a result, particularly on larger screens, the graphics are more precise, the colors are more affluent, and the overall watching experience is more realistic.

Part 2. How to Convert Blu-ray to Digital

Preparation Before You Convert Blu-ray to Digital Copy

A Blu-ray disc is generally a large file in size. About 60GB of free storage space is needed. You can save Blu-ray movies to external hard drives or cloud storage afterward.

A Blu-ray to digital converter

Can you convert Blu-ray to digital? Absolutely YES! All you need is the AnyMP4 Blu-ray Ripper. Considering the drive size to store the ripped Blu-ray files, your Windows or macOS is ideal for this Blu-ray to digital converter.

AnyMP4 Blu-ray Ripper is a flexible Blu-ray converting program that you can download for free. It enables users to convert Blu-rays, folders, and ISO files to 4K UHD videos and 500 other digital formats with the original structure. Besides, it can also convert Blu-ray into an MKV lossless quality while maintaining the original audio tracks, subtitles, etc. Compared to other Blu-ray to digital copy converters, it has a 30x breakneck conversion speed and can keep the original quality.

1 On your computer, Free download and install the Blu-ray to digital converter. You must place the Blu-ray disc into the drive before you launch the program.

2 Click the Full Movie List and select the titles of the Blu-ray movie you want to convert. To convert the Blu-ray into MKV, go to the Rip All to option. Look for the MKV format under the Video tab. Otherwise, use the search bar to find the format quickly. 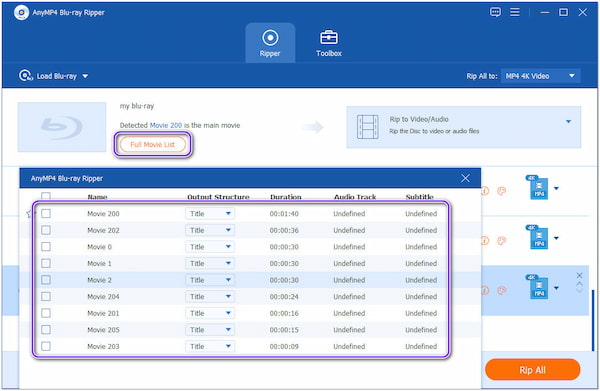 3 Following that, select a local file as the destination of your output. Click the Rip All button to extract the digital output from the Blu-ray disc. You can immediately transfer the output to your portable device when the conversion is done. 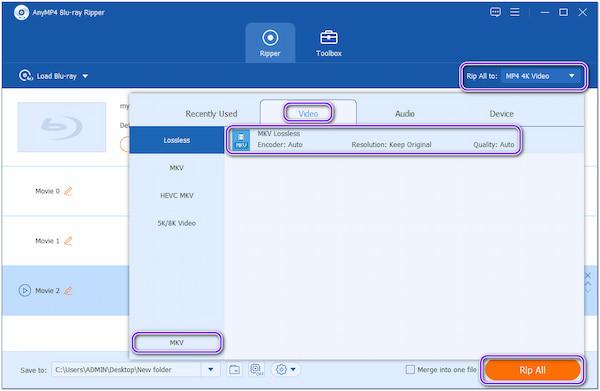 Moreover, with its built-in editing features, the Blu-ray Ripper allows you to edit before converting the disc. AnyMP4 Blu-ray Ripper's simple-to-use video editing tools let you customize the Blu-ray movie, from the movie effects to the video playback settings. You can crop, trim, rotate, add subtitles, add filters, add watermarks, and more.

1. How long will data last on a Blu-ray disc?

Recordable optical discs can have a lifespan that can range from a few years to more than 200 years, according to research studies, anecdotal evidence, and company documentation.

2. What is the advantage of a Blu-ray disc?

Why Blu-ray? The best in-home entertainment is available with Blu-ray Disc, which brings Full HD visuals and uncompressed, 7.1 channel sound into your house. The most excellent way to watch Full HD movies at home is Blu-ray, which offers 1080p video definition, crystal-clear surround sound, and expanded interactive capabilities.

3. What materials are Blu-ray Discs made of?

Similar in size to CDs and DVDs, the polycarbonate disc has a diameter of 120 millimeters (4.7 in) and a thickness of 1.2 millimeters (0.047 in). Dual-layer discs (50 GB) are the industry standard for feature-length video discs, while conventional or pre-BD-XL Blu-ray Discs have a 25 GB per layer storage capacity.

Now that you have learned the best Blu-ray format, you already know what to choose. However, MKV and 4K are excellent Blu-ray formats, so if they are incompatible with your device, you can still use other digital formats. Remember that Blu-ray surpasses video and audio quality but is limited in compatibility. To make the most of the Blu-ray discs, you can use AnyMP4 Blu-ray Ripper, the best way to convert Blu-ray to digital file video. If you have any concerns regarding any related topic, let us know. Leave a comment below.

Add your comments to join the discussion here
You are here: Home > Blu-ray > Convert Blu-ray to Digital